Part Two – Constitutional Crisis May Be At Hand 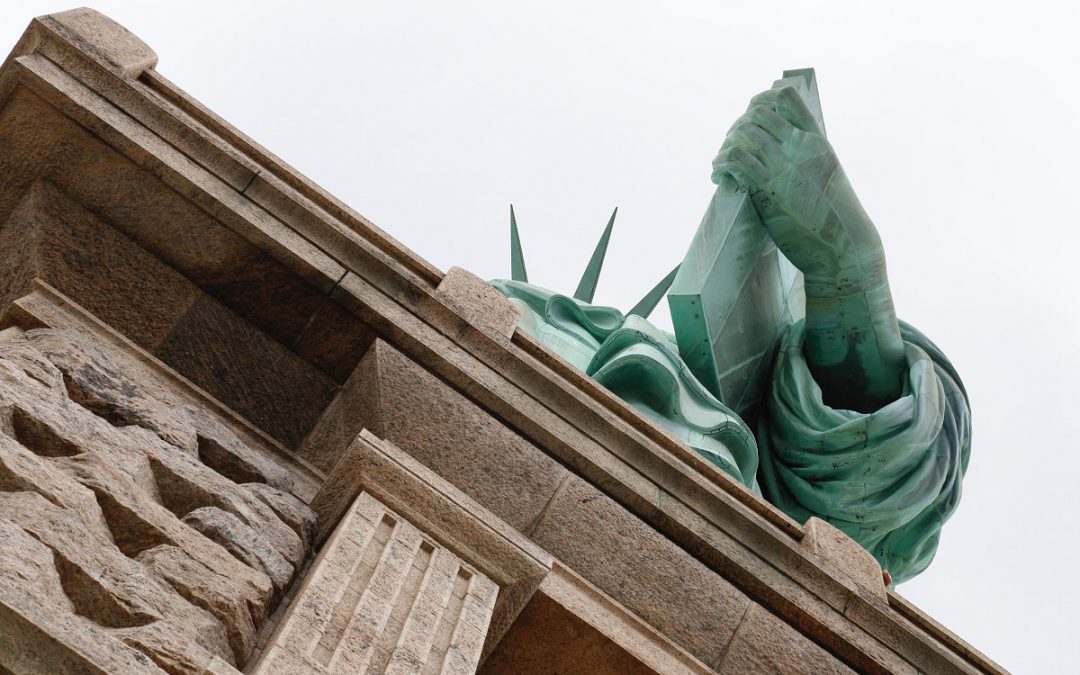 Trump is the Pied Piper using his evil deception to lure the GOP in Congress, the Fox/echo & the party’s base to their own destruction.  He’s leading us all on a path to nowhere that could have serious long-term repercussions.  This war on the FBI with the purpose of ultimately derailing the Russian investigation is leaning towards totalitarian dictatorship territory!  We heard Trump in the SOTU speech give a cryptic preamble to his dirty fight against the American intelligence agencies he was about to unleash, with these ominous words that we should “remove federal employees who undermine the public trust.”  This is simply a case of the modern-day American Fuhrer demanding the salute Heil Trump coming from the lips of intelligence community leadership, establishing his own Gestapo to purge his political enemies, which failure for those leaders to pledge total loyalty to Trump would cause them to be purged.  What Trump doesn’t know or doesn’t care is these agencies like the Justice Dept. & FBI do not answer to him, they answer to the nation & the Constitution.

After axing Comey & now McCabe, it looks like that line was thrown into SOTU as justification for eliminating others who aren’t his compliant puppets, perhaps Rosenstein & then Mueller.  We’ve recently found out he had tried to order Mueller’s firing last June & asked for a loyalty oath from Rosenstein in December.  But no matter how much the prez tries to pave the way for such reckless actions, this is a clear pattern of behavior to obstruct justice in criminal investigations.  And those firings if he pulls them off would amount to an abuse of power creating a constitutional crisis.  Ditto if Christopher Wray quits over the release of this Nunes memo.  And how is a short memo really going to tell us about the details of a long, complicated FISA warrant as to whether Carter Page was properly surveilled or not.  The public won’t have a clue, they’ll just believe what they want to believe along party lines.  This is crazy.  This is focused on all the wrong things, since we really need to know all the relevant circumstances involving the Russians attacking our election campaigns.  Trump & his GOP accomplices want to stop us from finding out.  Bringing on a constitutional crisis by doing anything to derail the investigations, that would permanently sever Trump’s authority to be our president.  Especially if Rosenstein is let go, paving the way for Mueller to go or the funding for the investigation to stop, all hell would break loose!

The DOJ & FBI are bucking the release of that memo since it contains classified info that would expose sources & methods, with the FBI even releasing a statement they have “grave concerns” over the Nunes memo.  They’re saying conclusions drawn from the memo are misleading by not telling the whole story, having material omissions of fact, plus is potentially dangerous.  Chief of Staff John Kelly reportedly dismissed the pleas of Rod Rosenstein & Christopher Wray that it’s not in the national interest to release the memo.  Some of the most important yet dangerous occupations for advancing America’s interests & keeping us safe come from these informants throughout the world, so releasing this memo could place them at risk, plus we could be blowing our trusts & driving away these critical contacts from taking the risks to work with our intelligence agencies in the future.  The information flow could be cut off, making us more vulnerable to the moves of our enemies.  And don’t dismiss the dangers these sources might face, as we’ve already heard of lives lost among those associated with the Steele dossier.  Essentially, the prez & his servants are willing to put the lives on the line of vital informants critical to our national security, all for their true motives of trying to derail the Mueller investigation & prevent the facts about Russia from coming out.  Trump doesn’t seem to give a darn, he’s just desperately trying to save his own hide.  Now that the White House has finally read the memo, there are hints of concern on their part it might be a dud, not having the impact they want of casting the FBI in a very bad light.

Nunes had already proven himself a fraud & in bed with the president over last year’s backroom White House meeting, where he was given concocted evidence of Obama surveilling Trump during the campaign. He’s become a deranged conspiracy lunatic practically on par with Hannity & Alex Jones. So Nunes keeps going down these rabbit holes that make no sense & without evidence, but he keeps throwing all this junk at us anyway. Dems are correctly requesting Nunes step down from his committee post, as he had previously presumably done last year, plus I believe he’s even personally in the crosshairs of the investigation.  And all this crap reporting from the echo that somehow the FBI was biased against Trump, or the Hillary campaign was involved in some kind of conspiracy with the Russians, are all bunk.  If that were true, why would most all the email dumps from WikiLeaks & the bombardment of fake social media ads from Russian bots be pro-Trump & anti-Hillary?  And why would the FBI release a letter throwing a wrench into Hillary’s campaign just a week before the election?  Helping write that letter was none other than Peter Strzok, the same FBI agent at the center of the firestorm who the Trump minions & echo have accused of being biased against Trump!  Maybe we need an investigation to see if Strzok actually had an anti-Hillary bias that helped Trump win the election.  That’s the same guy who the GOP constantly smears in trying to discredit the Steele dossier & the Mueller investigation, & the one who Trump recently claimed Strzok’s doings were acts of “treason!”  Folks, you can’t make this stuff up!

A FISA warrant through the courts is not possible to obtain without solid evidence, so right there it undermines the main premise of the memo.  Nunes & the gang didn’t even bother reviewing the FISA warrant that their written memo is based on, & it really didn’t matter to them.  All they wanted was a hit piece to smear the FBI, so they could take down Rosenstein, so it could pave a path to either discredit the Mueller investigation or dismiss Mueller.  Their ultimate fantasy in this corrupt authoritarian world is the wet dream of shutting down the investigation altogether.  Any underhanded tactic is not beneath them since they will stop at nothing knowing failure to derail the Mueller probe will probably end in criminal indictments for many surrounding Trump, not to mention articles of impeachment.  They’re desperate, so they’re taking desperate measures.  And if they’re willing to take the risk of releasing the classified info contained in that memo, at least for transparency sake let’s also release the countering Dem memo, which is reportedly far more credible & accurately sourced.  We’ve also gotten word Nunes made substantive material changes to the memo from the one originally coming out of the committee, compared to the one going to be released by the White House.  The funny business continues.

Trump is actually governing based on Fox fake-news & wild conspiracy theories.  The White House & echo are working hand-in-hand together, now with the cooperation of some in Congress.  It does look as though the running of the interference on the Russian investigation is being coordinated by the White House sending out marching orders to the likes of Nunes & Hannity.  These are guys that have been faithful stooges in the scandal cover-up from the beginning, & lately have been building up expectations of the contents in the memo.  And it was these lapdogs who convinced the prez how the memo might exonerate him from the scandal, so he’s told others this could help stop the Mueller probe, more signs of obstruction.  To use an analogy of the ridiculousness of what we’re seeing, these henchmen running this interference for their omnipotent leader are in effect telling us to take our eye off this investigation for grand larceny because the real crime is over there with that kid shoplifting a Snickers bar.

The related articles below feature groups of links on Strzok, the memo, Fox fake-news, & other wildly-distorted messaging sources.  One person seems to be the head ringleader of lunacy.  We see the insanity of Hannity in several articles, including him being fed conspiracy theories from the WikiLeaks guru.  And based on news stories over time & their cognitive dissonance over the prez, just look at this list of those conservatives I’ve always respected who’ve seemingly been corrupted by Trump: Mike Pence, John Kelly, Paul Ryan, Orrin Hatch, Mike Huckabee, Newt Gingrich, Ben Carson, Franklin Graham, Pat Robertson & several others who’ve sacrificed their principles to gain favor with an unscrupulous demagogue.  I’m sure there are many others that have escaped me off the top of my head who belong on this list.  But please do peruse the newsfeed links below.  And please do spread the message from The Voracs, informing others of the constitutional crisis we may be facing.

The article trumps-gop-a-conspiracy-of-dunces is really good about the avalanche of conspiracies coming from Trump-world & his echo, with some choice words seen in these excerpts:

Secret societies, government agents of dubious loyalties, dark cabals who work from shadowy bureaucracies seeking to overthrow the president of the United States, sinister masterminds exercising fell powers to serve a diabolical conspiracy, occult powers that shift the levers of control in mysterious ways—no, it’s not X-Files fan fiction or some modern-day Lovecraft reboot. It’s today’s GOP. The Republican Party’s head-first dive into breathless conspiratorial fantasies in defense of Donald Trump is a brand-defining moment as the Party of Lincoln morphs into the Party of LaRouche. Listening as members of Congress, the Fox News/talk-radio world and the constellation of batshit-crazy people drawn to Esoteric Trumpism adopt increasingly baroque theories to protect The Donald isn’t just depressing; it’s tragic. A diseased slurry of fake news, post-Truth Trumpism, and Russkie agitprop infects the Republican Party. It’s an ebola of wild-eyed MK-ULTRA paranoiac raving, spreading to every organ of the Republican body politic.

The endless torrent of raw political sewage coming from Fox & Friends, Hannity, Laura Ingraham, and Tucker Carlson comprises the headwaters of a right-wing media ecosystem that feeds the beast. The straight-news folks at Fox are under constant siege.And the Republican base, fed on a diet of weapons-grade conspiracy theories, day-drinking rage, 8chan trolling, and blind defense of Trump? They know the truth, man. They’re woke. They know that all opposition to Trump comes from George Soros, the shape-shifting reptilians, the Deep State, the Illuminati, zombie Bin Laden, the Gnomes of Zurich, and the Freemasons. They know that Bob Mueller is an alien sent from the Sharia-compliant future to impose the New World Order by asking Donald Trump tough questions. Oh, and implanting them all with a brain chip to control their thoughts. #QAnon say so.

The memo is indeed nuts, which this list helps explain taken from the-memogate-farce-tells-us-far-more-about-trump-his-cult-the-russia-investigation-than-the-fbi:

As for the idea that maybe Nunes is really onto something big, this concept would require at least even a tenuously plausible theory to explain the vast conspiracy. Given what we already know, there are numerous data points which make that inherently impossible.

Here are those key points:

*When the investigation began, Trump was highly unlikely to become President, thus no one would risk their career to engage in this conspiracy.

*It was the FBI Director himself who saved Trump’s campaign with the anti-Hillary Clinton letter released near the end of the campaign.

*Comey was praised by Trump during the campaign and maintained by him once he took office.

*Mueller is a highly-respected Republican.

In short, there is just no way to make this crazy conspiracy work in the real world.