Like a Pandemic, Hurricane or Wildfire, Trump has Taken Us by Storm! 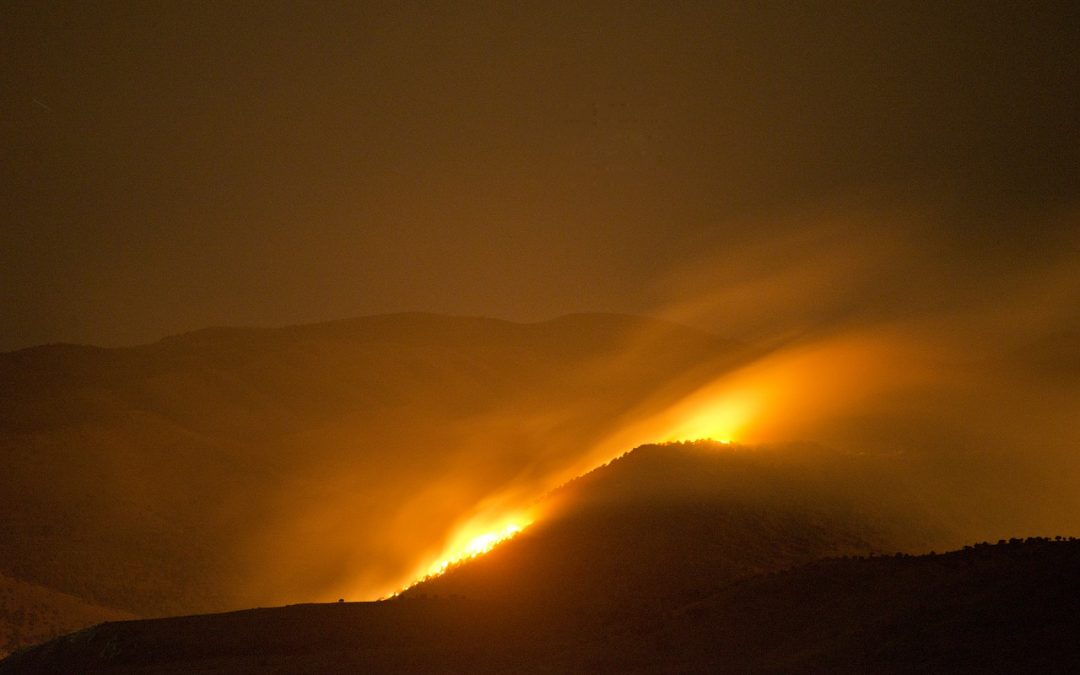 In light of one disastrous calamity after another, much of it self-induced by the person in charge of leading our country, there’s one glaringly obvious question we can’t help but keep wondering about: https://thehill.com/opinion/white-house/515938-when-will-trumps-supporters-see-him-for-who-he-is.  Maybe nothing matters to these brainwashed fans, they really would excuse him for shooting someone on Fifth Avenue.  There are different degrees of Trumpeter insanity, with the really hardcore being truly dangerous.  QAnon & related offshoots are even classified as domestic terrorist groups.  Those who support Q must be sorely lacking in IQ.  Yep, they’re several bricks short of a chimney!  Check out these more deranged Trumpeters inside the links, as they are driven by angry rage around a delusional group-think rather than logic & reason.  These clowns are so far out there & beyond nutso, by comparison they can make crazy look relatively normal:
https://www.msn.com/en-us/news/us/emergency-dispatchers-overrun-with-qanon-fans-spreading-fake-claims-about-wildfires-in-oregon/ar-BB18WbPK
https://www.msn.com/en-us/news/politics/crowd-chants-lock-him-up-at-obama-after-trump-accuses-him-of-spying-on-campaign/vi-BB191bo1?ocid=ACERDHP17
https://www.msn.com/en-us/news/world/around-the-world-health-officials-face-death-threats-amid-pandemic/ar-BB191xba?ocid=msedgdhp
https://news.yahoo.com/husband-of-scarborough-aide-who-died-in-2001-speaks-out-about-trumps-conspiracy-tweets-its-just-inhuman-090015447.html
https://www.yahoo.com/news/trumpkins-losing-mind-over-occupy-083313752.html
https://www.yahoo.com/news/qanon-nazism-wants-comeback-anti-145044921.html
https://www.businessinsider.com/pew-poll-trump-supporters-views-on-racism-2020-9
https://www.politico.com/news/2020/09/14/florida-latinos-disinformation-413923
https://www.vox.com/2020/9/8/21417403/patriot-prayer-explained-portland
https://www.vox.com/recode/21419328/facebook-conservative-bias-right-wing-crowdtangle-election
https://www.motherjones.com/politics/2020/09/wildfires-antifa-russian-state-media-right-wing-reddit-facebook-conspiracy/
https://slate.com/news-and-politics/2020/09/america-insurgency-chaos-trump-violence.html
https://www.thedailybeast.com/vp-pence-and-top-trump-campaign-officials-to-attend-fundraiser-hosted-by-qanon-nuts?ref=home
https://www.thedailybeast.com/right-richter-austin-steinbart-man-known-as-babyq-is-in-trouble-for-using-synthetic-penis?ref=home
https://www.nytimes.com/2018/11/12/opinion/russia-meddling-disinformation-fake-news-elections.html?action=click&module=Opinion&pgtype=Homepage
https://www.washingtonpost.com/opinions/2020/09/13/whiny-core-trumpism/
https://nymag.com/intelligencer/2020/09/how-fantasy-triumphed-over-reality-in-american-politics.html
https://www.newsweek.com/salem-protest-far-right-qanon-democrats-shot-1530230
https://www.theweek.com/articles/936313/only-twitter-end-trump-era
https://www.theweek.com/articles/936589/epistemic-crisis-political-polling
https://time.com/5887437/conspiracy-theories-2020-election/
https://time.com/5888451/pence-trump-fundraiser-hosted-qanon-supporters/
https://www.buzzfeednews.com/article/rosiegray/peter-thiel-donald-trump-white-nationalist-support
https://www.vanityfair.com/news/2020/09/donald-trump-jr-kyle-rittenhouse
https://www.vanityfair.com/news/2020/09/democrats-are-girding-for-post-election-chaos
https://www.vanityfair.com/news/2020/09/donald-trump-domestic-terrorism-threat#intcid=recommendations_vf-trending-legacy_c0421f94-1a15-4f98-a25c-81d16e807f99_popular4-1
https://www.mediamatters.org/roger-stone/roger-stone-calls-trump-seize-total-power-if-he-loses-election
https://www.mediamatters.org/coronavirus-covid-19/sinclairs-america-week-pushes-more-dangerous-claims-about-covid-19
https://www.mediamatters.org/donald-trump/press-making-same-mistakes-2016-and-time-running-out-fix-problem
https://www.mediaite.com/tv/george-stephanopoulos-calls-out-jason-miller-for-trying-to-hit-biden-with-swine-flu-covid-comparison/
https://www.salon.com/2020/09/09/mike-pence-plans-to-attend-fundraiser-hosted-by-qanon-adherents-report_partner/
https://www.salon.com/2020/09/13/what-are-the-true-goals-of-qanon-its-the-21st-centurys-ultimate-catfish-scheme/
https://www.salon.com/2020/09/09/theyre-extremely-sophisticated-dhs-confirms-white-supremacists-remain-the-biggest-threat-to-us_partner/
https://www.salon.com/2020/09/14/who-are-those-people-morning-joe-rips-trump-fans-who-swallow-presidents-continued-lies_partner/
https://www.salon.com/2020/09/10/american-bloodlands-in-a-deeply-polarized-nation-mass-violence-is-not-far-away/
https://www.salon.com/2020/09/08/watch-proud-boys-brutally-beat-black-lives-matter-protesters-after-trump-rally_partner/
https://www.alternet.org/2020/09/wannabe-stormtroopers-white-men-with-guns-in-trumps-america-are-ing-the-sanctity-of-representative-democracy-and-our-american-system/
https://www.alternet.org/2020/09/expert-on-genocide-and-anti-semitism-lays-out-the-frightening-parallels-between-qanon-and-hitlers-nazis/
https://www.alternet.org/2020/09/19-years-after-9-11-americas-biggest-terrorist-threat-is-far-right-white-supremacists-who-love-trump/
https://www.alternet.org/2020/09/american-rage-is-fueling-political-campaigns-and-tearing-us-apart/
https://www.rawstory.com/2020/09/trump-and-his-conspiracy-obsessed-followers-are-the-real-threat-to-law-and-order/
https://www.palmerreport.com/analysis/the-end-of-donald-trumps-post-truth-era/32169/
https://www.dailykos.com/stories/2020/9/12/1976909/–TedCruzHasNoBalls-is-trending-on-Twitter-For-the-love-of-Ted-Cruz-please-make-it-stop
https://www.dailykos.com/stories/2020/9/12/1976866/-Genocide-expert-Gregory-Stanton-shows-QAnon-using-the-exact-same-conspiracies-the-Nazis-used
https://www.dailykos.com/stories/2020/9/13/1976928/-How-to-defeat-QAnon-now-and-after-the-election
https://www.dailykos.com/stories/2020/9/9/1976159/-Government-experts-say-white-supremacist-groups-remain-top-U-S-terrorism-threat
Evangelicals Need Saved
Most evangelicals have all along fallen for the Trump/echo deception, but there are hopeful signs for some the latest presidential shenanigans might have become a bridge too far.  We should vote Trump out to help evangelicals in spite of themselves, since another 4 years of this madness might not only do irreparable damage to the GOP & our democracy, but also to the evangelical church.  My earnest plea to those of faith who are still with this guy, when you’re seeking to convince others how to live & how to get into heaven, your words ring hollow when the world sees you as immoral hypocrites.  These are the article links posted for you, & as Kasich says in an article, the abortion issue cannot justify prolonging this travesty of leadership:
https://www.msn.com/en-us/news/politics/christian-group-launches-new-effort-to-convince-swing-state-believers-that-their-faith-should-lead-them-to-vote-against-trump/ar-BB18P6gw?ocid=msedgdhp
https://www.msn.com/en-us/news/politics/poll-suggests-trump-may-be-losing-support-of-some-evangelical-voters/vi-BB18YjHa?ocid=msedgdhp
https://www.msn.com/en-us/news/politics/michael-cohen-suggests-jerry-falwell-s-trump-endorsement-was-favor-for-hiding-racy-photos/ar-BB18PGqJ?ocid=msedgdhp
https://www.politico.com/news/2020/09/10/trump-religious-voters-411248
https://www.usatoday.com/story/opinion/voices/2020/09/11/find-unity-in-faith-build-more-equal-america-john-kasich-column/5758554002/
https://thehill.com/homenews/campaign/516075-kasich-to-meghan-mccain-concern-over-abortion-dwarfed-by-need-to-beat-trump
https://www.newsmax.com/politics/evangelicals-catholics-religious/2020/09/10/id/986191/?ns_mail_uid=d66112f2-a648-400b-8da5-92d68de3edca&ns_mail_job=DM143260_09102020&s=acs&dkt_nbr=010102jeulw4
https://www.rollcall.com/2020/09/10/of-faith-values-and-a-2020-divide-how-do-voters-define-justice/
https://www.salon.com/2020/09/09/how-the-evangelical-movement-became-trumps-bitch–and-yes-i-know-what-that-word-signifies/
https://www.salon.com/2020/09/11/what-he-really-thinks-trump-mocks-christians-calls-them-fools-and-schmucks_partner/
https://www.salon.com/2020/09/13/faith-and-politics-mix-to-drive-evangelical-christians-climate-change-denial_partner/
https://www.alternet.org/2020/09/right-wing-christians-are-training-thousands-of-volunteers-to-help-interfere-in-the-election/
https://www.alternet.org/2020/09/the-threat-of-right-wing-theocracy-has-raised-it-ugly-head-once-again/
https://www.rawstory.com/2020/09/the-new-american-religion-of-qanon-is-giving-the-right-wing-an-army-of-useful-idiots/
https://www.rawstory.com/2020/09/expert-the-evangelical-belief-that-trump-is-the-messiah-is-more-rampant-and-dangerous-than-you-think/
https://www.rawstory.com/2020/09/trump-detests-christians-and-he-deceived-pastors-and-mocked-them-after-they-left-trump-tower-michael-cohens-disloyal/
Iris Blanchard Flores

Part 3 – Our Shattered Economy & Virus Deaths are on The Prez
There’s a major disconnect between Trumpeters & reality.  They still prefer Trump on the economy even though we’ve had monster job losses, a very steep recession, escalating deficits, widening wage/wealth gaps, & millions of Americans living in desperation as their livelihoods have been devastated.  His naive base also fails to grasp their prez is largely to blame for this disaster, since he completely failed to fight this virus pandemic which brought the economy to its knees, while they’re displaying a complete lack of understanding the path to a normal economy first requires getting a handle on the virus.  To whatever extent our economy has partially bounced back in recent months, it was mainly due to the initial stimulus package & the Fed flooding the system with liquidity.
Workers are suffering, but so are small businesses, another group that President Trump has let down: https://www.usatoday.com/story/money/columnist/2020/09/09/small-business-assistance-blame-trump-dying/5749371002/.  And the GOP Senate is letting desperate people down by playing Scrooge on a new rescue package.  Other nations who actually got serious in fighting the virus that kept their case counts & deaths down, they were able to reopen their economies more safely & didn’t suffer such a severe downtown, so it’s inexplicable our prez couldn’t adopt a playbook from other countries on what steps effectively work.  And as Americans, we’ve all paid a hefty price in our collective health & finances.  And on another issue, it only took him almost 4 years to act on drug prices?: https://thehill.com/policy/healthcare/516225-trump-signs-new-executive-order-aimed-at-lowering-drug-prices.  But an executive order doesn’t have the staying power of a bill that passes through Congress, which this supposed renowned dealmaker may have met his match.
Want another example of bad dealmaking?  If any good did come out of the Trump presidency, it was shining the light on trade deals which for decades green-lighted corporations to move millions of manufacturing jobs out of America, especially with respect to China.  But Trump failed to consummate a deal for a level playing field while launching destructive trade wars, so here’s hoping the next administration can work out a fair agreement acceptable to both sides.  Neglect of this issue has caused a long painful demise of countless manufacturing factories around here, as here was the huge GM plant just down the turnpike from my community: https://www.thedailybeast.com/ohio-auto-workers-watch-a-way-of-life-circle-the-drain?ref=home.  Has Trump really made many good deals on any issue either domestically or internationally?  He’s done nothing to help correct this major concern, as the pendulum needs to swing back on growing wage/wealth gaps: https://time.com/5888024/50-trillion-income-inequality-america/.
I was always a climate change skeptic, but we can’t ignore what’s going on with wildfires, hurricanes (blowing right through the alphabet on named storms) & higher temps at unprecedented levels: https://www.youtube.com/watch?v=OGU3O1t7zik.  Those breathing in the dirty air & contract COVID are far more susceptible to serious complications.  Trump’s solution to the apocalyptic looking orange-glare fires (matching his facial skin coloring) is not renewable clean energy, but to rake the forests & ignore climate change: https://www.msn.com/en-us/news/politics/oregon-senator-says-trump-s-blame-on-forest-management-for-wildfires-is-just-a-big-and-devastating-lie/ar-BB18ZkbB?ocid=Peregrine & also see https://www.politico.com/states/california/story/2020/09/11/the-west-is-on-fire-it-took-trump-3-weeks-to-mention-it-1316566.  Let’s remember among Trump’s many reckless moves, a few years ago he pulled out of the Paris climate accord.  And this is a guy who wants to run on his record?: https://www.alternet.org/2020/09/trump-is-running-in-2020-on-an-astonishingly-long-list-of-broken-promises/.