Part Three – Trump Proposal on DACA has Both Sides Complaining 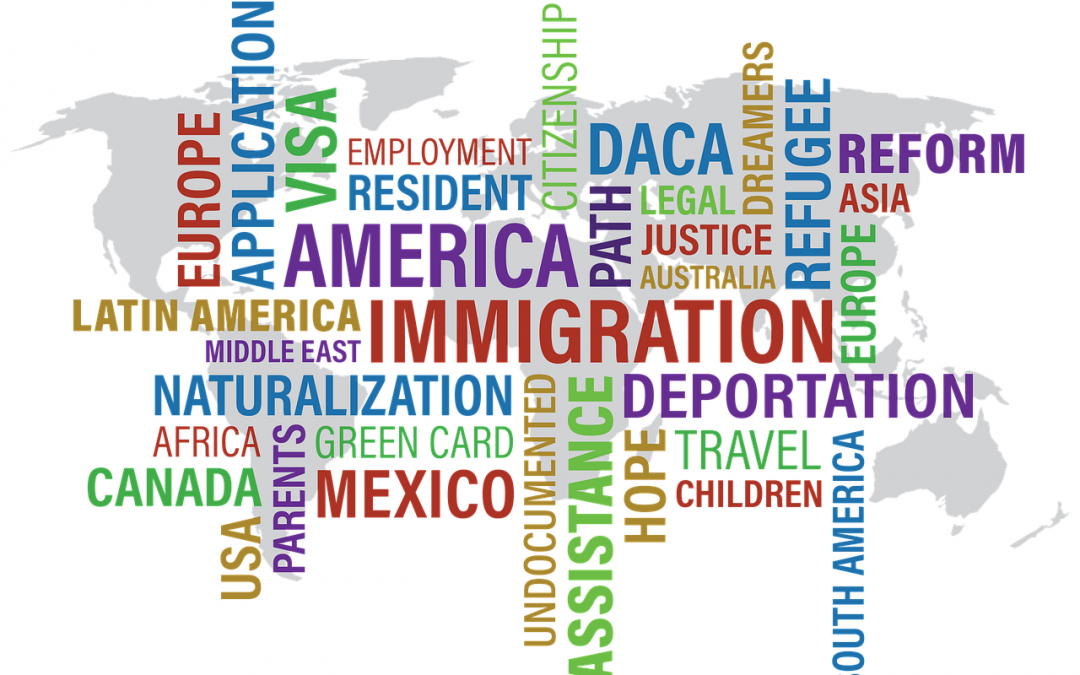 Big corporations are loving their sweet deal from the huge tax cuts, which some in a gesture of goodwill are making investments to expand & passing a bit of their windfalls onto employees.  It’s created a feel-good moment, but don’t expect this sudden surge of corporate benevolence to extend very far into the future.  Trump’s temporary sugar-high economic policies I believe will be found more designed for a quick spike vs. long-term sustained growth.  As an example, I’m all for nations making fair trade deals which don’t penalize their domestic industries, but engaging in escalating trade wars & ceding economic control of the fastest growing region in the world to China, that isn’t likely to end well.  His tariffs will be reciprocated by our trading partners, likely costing more jobs than they save, eroding away at growth & wages.  The growth we’re seeing can be interpreted as mostly happening apart from Trump, since the rest of the developed world are experiencing similar if not better economic growth.  And the word going around at Davos, they’re plenty worried about Trump’s nationalist approach sparking a widespread protectionist trade stance, which can be good to an extent in protecting domestic industries if done wisely without overdoing it, but doing it in a reckless way could lead to slowing down economies everywhere.

The one policy now being implemented that could result in long-term economic gain would be deregulations, especially in the energy sector.  But the tax cut is more like a shot of caffeine, giving the economy a brief rush, but actually working against core problems like income inequality which need a far more norm-busting cerebral approach.  I’ve been adamant in my views against trickle-down, which that supply-side component in the new tax plan will end up boomeranging against us.  Trump is quick to brag about individual instances of investments, hiring & paid bonuses, but that’s just cherry-picking a relatively small number of examples compared to the macro-economy a president’s policies are tasked to oversee.  As a consummate con man, Trump is a master of hyping his successes, while stubbornly refusing to even acknowledge the failures.  What he brags about now like record stock market highs & low unemployment, when those trends take a negative turn as they surely will, it will be interesting to hear him spin it.

Leave it to Trump. By stealing the headlines on Thursday with his announced Trump proposal on DACA to give Dreamers a path to citizenship, it helps knock off the Russian revelations & newly debunked conspiracy theories from being the lead stories (at least until tonight’s news of ordering Mueller’s firing in June hit the news).  Over the next couple weeks, we’ll find out if the gang of 25 moderate Senators can piggyback on Trump’s comments & sell their comprehensive immigration plan, or will the hardliners win out & maybe steer America into a possibly prolonged, destructive shutdown.  The nation is with them on a DACA deal, in favor of providing a pathway for Dreamers.  But the Dems need to spread a compelling message & galvanize that support.  Ideally, any proposal would also need to garner bipartisan support over in the House, then send it to the prez & dare him to sign it.  Will he sign whatever Congress sends him as he originally claimed, or cave to the hardliners in the Freedom Caucus & the echo?  The prez even just said he wants a pathway to citizenship for Dreamers, but he’s backtracked on his word before when the hardliners go into conniption fits, shouting back at him “Amnesty Don.”  But whether it’s the issue of DACA/Border Security or the multitude of other concerns we’re failing to deal with, until the extremists on both sides are willing to bend, our problems persist. In staying devoted to tribal allegiances instead of pursuing the common good for the nation as a whole, America can never move forward.

In this links below, the first article on better capitalism shows the below chart illustrating how wages haven’t kept pace with GDP, sort of highlighting we really do need better capitalism to lift up middle-class workers who’ve lost so much ground.  Even with economies currently relatively strong in America & other countries, it’s the working class still getting the shaft, indicating we need much bigger/better ideas for restoring the equilibrium that goes well beyond the piecemeal issues DC currently haggles over: 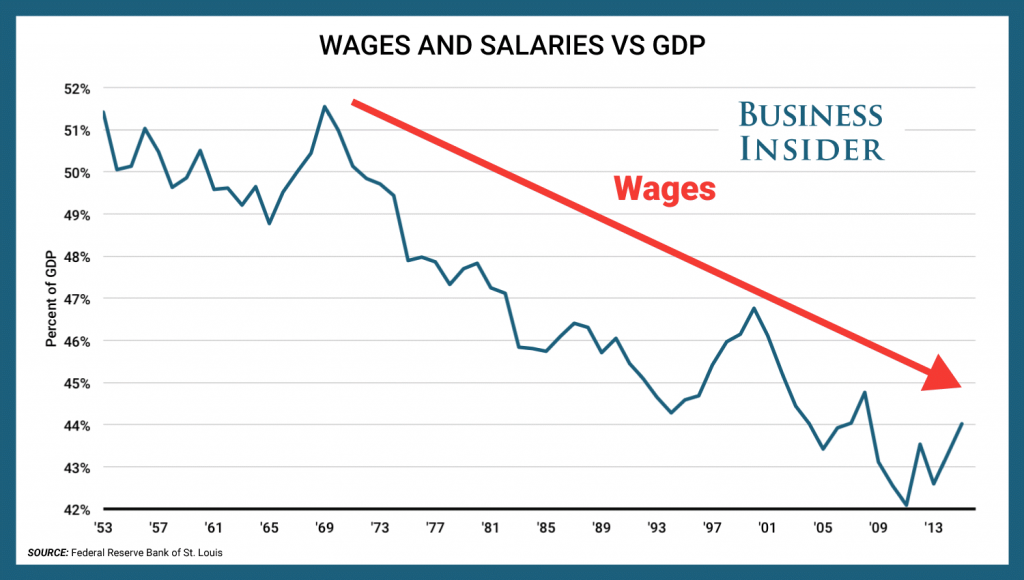 See the other links exploring more of our economic problems, where we haven’t really seen much widespread improvement in spite of Trumpeters believing their master’s cheerleading. Here’s a reality check taken from janet-yellen-federal-chair-economy_us, which has the headline Why is the Economy Still Broken?:

Republicans have spent all year trying to take credit for the condition of the economy, as if a roaring stock market and low unemployment were all happening without any central bank activity at all. And that’s the problem. Because the current economy isn’t a smash hit. It is, at best, a mess. In important respects, it is in crisis. Inequality remains at or near record highs, an ongoing disaster that can’t be captured by monetary statistics ― American life expectancy has declined for two consecutive years. Our bridges collapse, our airports black out and our trains derail ― though we have both the financial means and the technological know-how to prevent all of these debacles.

As far as any Trump proposal on trade deals, his plans are a double-edged sword.  From the Davos gathering inside the link trump-broke-up-with-the-world-and-the-world-is-moving-on , here is a point of disagreement Trump has with our trading partners:

Trump’s obsession with bilateral deals is not hard to grok. Multilateral agreements are complex, nuanced, effete. Trump’s brand of deal-making is all about man-to-man dominance, not intricate negotiations between multiple partners. Trade experts, however, view bilateral pacts as something of an anachronism. Last November, longtime trade official Wendy Cutler, who is now the vice president of the Asia Society Policy Institute, told The Washington Post that “none of the trading partners, particularly in Asia, seem to be enthused about such a prospect.” Their disinterest likely has something to do with the fact that, as the Brookings Institution’s Ryan Hass commented last year, the Trump administration’s M.O. on trade “doesn’t reflect modern trade patterns,” such as the fact that a smartphone may contain parts from Japan, Taiwan, and South Korea that are shipped through China before being exported to the U.S. and Europe.

Trade deals should be done where all sides play by the same rules, which the issue of tariffs can get tricky.  In the article trump-action-on-tariffs-triggers-gop-alarm, it mentions these concerns:

Sen. Ben Sasse (R-Neb.) accused the GOP of abandoning free-trade principles. “Here’s something Republicans used to understand: Tariffs are taxes on families. Moms and dads shopping on a budget for a new washing machine will pay for this — not big companies. You don’t fix eight years of bad energy policy with bad trade policy,” he said in a statement. Rep. Mark Sanford (R-S.C.), in a statement, called the Trump administration’s decision “a mistake.” “If increasing tariffs were the road to prosperity, then a whole host of economically forgotten places around the world would be vibrant. They are not,” Sanford said. “Increased tariffs have proved themselves to sound great, but set countries on a financial road to ruin. This is shortsighted and will cost American jobs,” he said.

A brief review of other articles, there’s a rather contrarian point of view on trade in trade-predators-destroy-american-jobs-editorials-debates, which speaks of “the predatory behavior of our trade competitors” & recommends we take measures to reduce our trade deficit.  The Q4 preliminary GDP numbers were kind of lukewarm.  And despite the faith & optimism, many blue-collar workers have placed in Trump, we’re hearing union leaders like Richard Trumka & Chuck Jones express disappointment based on what Trump is not doing for workers.  His scripted Davos speech he almost sounds comatose compared to the rallies in front of cheering crowds we’ve grown accustomed to.

Moving down the list of links, the largest group offers articles on the immigration negotiations, which reasonable heads would be easily able to hammer out a deal.  But DC is so broken & the fringes of the parties so entrenched, fully expect we’ll see another government shutdown sometime between Feb. 8th & early March, which this one could last much longer than 3 days.  Remember, the Graham-Durbin group already had a deal before Trump shot it down.  Nobody knows where the prez really stands.  The immigration plan he just rolled out is disliked by the far-left & far-right.  On the left, it’s DOA based on reducing legal immigration.  The right hates what they refer to as “amnesty” for Dreamers, which this could turn into the one issue which causes a break with his base, something he’s always bent over backward not to do.  If we were to see the economy cool off & the hardliners in his core base turn against him over a DACA deal, plus with the steady stream of damaging Russia scandal news, his approval numbers could crater into the 20’s (where Nixon was before resigning).

The articles toward the bottom, I am encouraged over the group of articles on gerrymandering, where we’re seeing a new attitude from people & judges offering hope this mess with the crazily-drawn districts can someday be corrected.  Very few reasons can be blamed for the ongoing DC polarization, extremism, obstruction & gridlock more than gerrymandering.  Also, see the link at the very bottom discussing our destructive polarization.

If you like these commentaries & related articles, please share The Voracs with others.  New updates have typically been coming out twice per week on Tuesdays & Fridays.  The news these days is coming out so fast & furious, it’s hard to keep up with it all!  We help organize the news stories that are most relevant while providing an important perspective the conservative media have long since abandoned.

In recognition of the “Secret Society”….

that is the far-right’s conspiracy theory of the week.  It has been hyped up by Nunes & his congressional allies, plus Hannity & his echo-perpetrators. 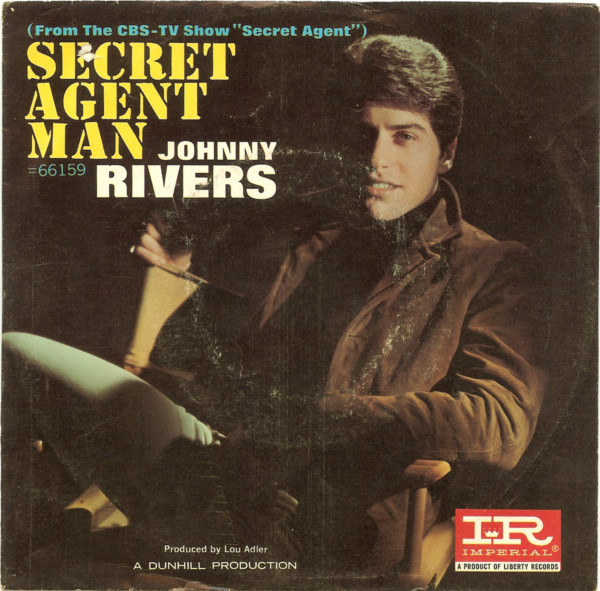