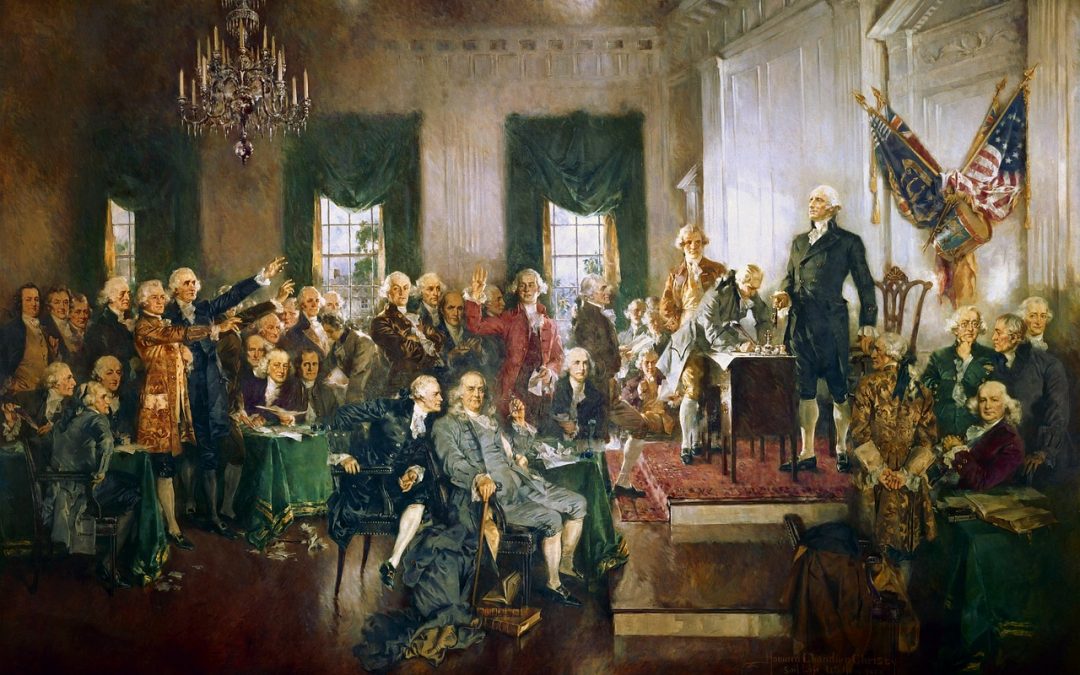 When Trump Violates Consitution: The News Headlines Keep Getting Wilder…

The only possible explanation for the shenanigans we’re seeing is that Trump violates constitution and must be guilty, he knows he’s guilty, the Mueller investigation is about to prove that. So the prez is coming out with guns blazing to do whatever he can to discredit & stop the probe. He must figure he has nothing left to lose, so going on the attack against the DOJ & FBI is his only hope. They’ve gone more spastic lately than ever before, which might signal another news bombshell on the scandal is ready to drop. Today’s headlines featured ousting a long-time FBI top official & a decision to release a bogus memo.  Firing McCabe signals a continuing purge by Trump of those in the intelligence community who’ve not made a blood sacrifice to him, & McCabe is someone our seemingly subhuman president has been berating for months.  When McCabe’s wife lost a local election running as a Dem, Trump even derided McCabe asking how’s his wife like being a loser?  Who does that?  The prez is a very sick individual, hardly seeming human.  This all-out demonizing & purging the DOJ & FBI are extremely dangerous, with this increasingly unhinged president wanting to fill the swamp with lackeys who are willing to attack his political opponents. This is somewhere between Nixonian & Stalinist here in America! Folks, this is a very dangerous leader, possibly a psychopath. He’ll stop at nothing to usurp power.

He’s guilty as sin. His actions confirm that.  Never overlook, this whole thing is all about the Russians attacking our election & the need to find out how it happened, yet the GOP is doing everything possible to hide the facts.  We have credible evidence of numerous crimes committed, so we can’t let them get away with hiding the truth.  Trump corrupts all he touches, which apparently includes most of the GOP.  WAKE UP CONSERVATIVES, DEMOCRACY IS UNDER ATTACK & YOU’VE TAKEN THE WRONG SIDE!!!  We’ve got a president running out of control with most in the GOP covering for him!  He relentlessly attacks the intelligence agencies, media, & really anyone he doesn’t like.  Incapable of being a decent human being, he has no business being president.  That’s why the Mueller probe must go on unimpeded, so we can learn the extent of the crimes over Russia.  Today Trump has even refused to impose the Russian sanctions ordered by Congress.  What is he hiding?  Carl Bernstein said tonight like the Saturday Night Massacre nearly a half-century ago, this might go down as the Monday Night Slaughter.  And those who are genuinely concerned about our nation, rule of law, Constitution & democracy, please do your part by sharing this message.  The blog The Voracs needs to be shared.  Never in our lifetimes has democracy been so threatened!

Grounds for impeachment based on the fact that Trump violates constitution, which many inside the GOP are also likely to be found complicit, & that doesn’t even take into account all the evidence Mueller has that we don’t even know about yet. But with impeachment being such a political issue & the majority of support for Trump from the GOP base still holding, there’s no doubt Mueller’s team is gunning for uncovering all the facts surrounding collusion with Russia during the campaign & complex financial ties.  The preponderance of evidence going well beyond obstruction could make for a slam-dunk case implicating Trump in a number of ways.  In this political climate, the investigation needs to be very thorough so the evidence becomes irrefutable. Some links below even take us to strong signs of additional charges like witness tampering or intimidation of witnesses. The evidence of guilt in a variety of crimes could become so overwhelming, the GOP Congress may soon have no other choice but to proceed with impeachment no matter how politically partisan they had previously been.

In the articles below, the first link is to Jennifer Rubin’s Right Turn blog site, since all her op-eds are important, including whether the GOP under Trump might disintegrate by 2020. In the next NYT link, David Leonhardt lays out a compelling case for impeachment, outlining many crimes by Trump & his staff without even knowing yet what Mueller knows. Scattered throughout the Russian links, there are some articles with Lindsey Graham saying it’d be the end of his presidency if he fired Mueller, & Ken Starr saying the president’s lying/denials over the Russian case are grounds for impeachment. Other links take us to the attack dogs are trying to use the secret Nunes memo to go after Rod Rosenstein for using a FISA warrant to surveil Carter Page, a remnant from Trump’s campaign. It does take solid evidence to obtain a FISA warrant. That indicates the Justice Dept. had probable cause/direct evidence of Page working in conjunction with the Russians, but the Trump henchmen will stop at nothing to smear Rosenstein to get at Mueller. We’d have a constitutional crisis on our hands if Trump were to fire Rosenstein, who he’d replace with a compliant puppet agreeing to fire Mueller. That would really be Russiagate’s version of Watergate’s Saturday Night Massacre (the firing of Archibald Cox), which proved the beginning of the end for Nixon.

Click on the link defeat-is-inevitable-everybody-knows-it-even-trump where parallels are drawn to Watergate.  As this building Russiagate scandal heads towards its inevitable fate, this excerpt provides the conclusion to the article stating this presidency is soon to face its conclusion:

There is one difference between the two cases. Special Prosecutor Leon Jaworski never questioned Richard Nixon about his role in the Watergate burglary and cover-up. He didn’t have to. On July 24, 1974, the Supreme Court decided in United States v. Nixon that the president had to release the White House tapes. Fifteen days later, the inevitable happened. Facing impeachment and the probability of being prosecuted after leaving office, Nixon made a deal for a pardon and resigned.

Now Washington’s immune system is about to expel yet another infection from the body politic. The end game is here. Even Trump knows it.

The plot thickens the more we learn.  Here’s some fascinating quotes about new info found in the article trump-russia-investigation-apos-extraordinarily:

The Senate Intelligence Committee received a number of “extraordinarily important new documents” late last year that could further expand the investigation into alleged collusion between President Donald Trump’s campaign and Russia and keep the probe going for much longer, according to its ranking Democrat. U.S. Senator Mark Warner (D-Virginia), who also serves as the Senate Intelligence Committee’s vice chairman, said the panel obtained “new information that raises more questions” and claimed “Trump zealots” and the president were conducting a “coordinated” effort to delegitimize the many probes involving the Republican commander-in-chief, according to an interview with Politico released Monday morning. “We’ve had new information that raises more questions,” Warner said. “Mueller is getting closer and closer to the truth,” Warner told Politico, and continued, “closer and closer to the truth is getting closer and closer to the president.”

From there we see very perceptive viewpoints in the articles such as trump-has-consistently-tried-to-steer-the-russia-investigation-into-a-different-direction-or-a-ditch, what-are-you-hiding-mr-president & trump-fears-the-truth.  In another article the-answer-to-whether-trump-obstructed-justice-is-now-clear, Jeffrey Toobin lays out the evidence & then concludes with this:

Abundant questions remain about Trump’s fate in the Mueller investigation. Can or will a sitting President be indicted? What, if anything, will the House of Representatives do with respect to its impeachment powers? In what forum and format will the public see the full range of the evidence against the President? But on perhaps the most important question of all—whether the President of the United States committed the crime of obstruction of justice—the answer now seems clear.

Another article the-obstruction-case-is-getting-solid lays out numerous instances that point toward Trump violates constitution, including starting off with this new revelation made public last week:

President Trump tried to fire special counsel Robert Mueller. That fact, reported Thursday night by the New York Times and confirmed by sources for the Washington Post and other papers, shreds the assurances from Republican lawmakers that Trump would never attempt such a thing. It also bolsters key elements of the case for impeachment. The aborted attempt to dismiss Mueller shows that Trump has sought to control the Russia investigation, that he has faked his reasons for disrupting it, and that he has ignored warnings that his behavior could be illegal.

Echoing those same thoughts, the article mueller-trump-obstruction-of-justice-russia starts off with this:

Thursday’s explosive New York Times story that President Donald Trump ordered the firing of special counsel Robert Mueller last June renewed the public’s focus on the obstruction of justice investigation against Trump, which will soon culminate in Trump’s interview by Mueller. The case against Trump has grown stronger in recent months, and it now appears likely that Mueller will conclude that Trump obstructed justice.

About the continuing speculation over whether Trump will ultimately find a way to have Mueller fired, in the article gop-senator-graham-warns-trumps-presidency-will-end-if-he-fires-robert-mueller, Lindsey Graham fires off this poignant warning:

Sen. Lindsey Graham didn’t mince words on Sunday, affirming that Donald Trump’s presidency would “end” if he fires special counsel Robert Mueller. Graham issued the stark warning on the same day as he and fellow Republican Sen. Susan Collins advocated for legislation that would prevent a president from firing a special counsel. “I’m sure that there will be an investigation around whether or not President Trump did try to fire Mr. Mueller. We know that he didn’t fire Mr. Mueller,” Graham said. “We know that if he tried to, it would be the end of his presidency.”

In order to get at Mueller, that’s behind all this ballyhoo about the bogus memo Nunes cooked up, which there are many articles about that memo in part 2. In shamelessly endeavoring to please their supreme leader, Nunes & his cohorts concocted a scheme to defame Rosenstein, who could be replaced at the DOJ with someone willing to fire Mueller.  In connecting the dots, it’s so obvious this is what’s been going on.  As we see in articles like trump-turns-russia-frustration-to-rosenstein, this excerpt shows the level of interest Trump had in removing the person seen as an obstacle:

The President has been venting about Rosenstein — who oversees Mueller and the special counsel investigation — in recent weeks, according to four sources familiar with the situation. At times, Trump even gripes about wanting Rosenstein removed, two of those sources said. One source said the President makes comments like “let’s fire him, let’s get rid of him” before his advisers convince him it’s an ill-fated idea.

Views from the far-left….

Always interesting, hard-hitting, highly speculative, but will eventually be shown more accurate than the far-right echo.  Fox News viewers would actually become a lot more politically savvy by reading these instead..